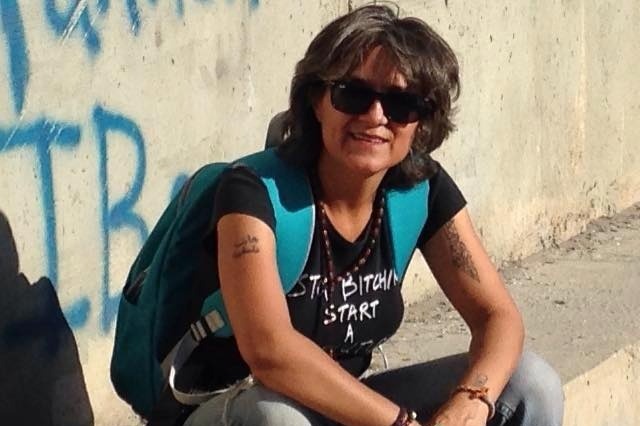 I am Nihaya Qawasmi, a Palestinian freelance journalist based in Jerusalem. I have been accepted for graduate studies at Utrecht University in the Netherlands to pursue a long planned degree focused on Gender Studies. My tuition fees will be covered by a loan I will coordinate, however I cannot afford the living expenses during my study and for that, I need your generosity to make my dream come true.

I have been trying to pursue my graduate studies for a long time but was defeated by Zionists administering academic programs in the US where my registration was even declined due to my Palestinian heritage and strong political views. I was also forced to leave my studies later in Lebanon and return hastily to Jerusalem as the Israeli authorities canceled my residency in Jerusalem if I stay longer outside the country.

Due to the residency issue in Jerusalem, I am struggling to maintain a status in the city while unable to work or study as all permits for work hinge on the residency issue. The last lawyer I met told me that due to the fact that I’m politically active, it might take me several years to regain my residency.

I tried to keep myself busy in a positive manner. I initially traveled to the different cities of Palestine to show my fellow refugees worldwide their homeland live on Facebook and even looked for the homes of their families before they were expelled from Palestine in 1948. I documented the abuse against the Jerusalemites at the hands of the occupation forces after Trump’s decision to move the embassy to Jerusalem and I am actively engaging Palestinians and others worldwide, through social media, to keep them abreast of happenings in Palestine.

I am also active in my community and have worked with the children in my neglected neighborhood on fixing some of the problems that we have. We fixed a road full of holes and we cleaned up the neighborhood. We pay taxes through the nose, but we hardly receive any services from the occupation authorities. Despite that, I wanted to teach the kids that Palestine is their homeland and it is their duty to keep it clean and beautiful and this is how they grow their sense of citizenship and belonging to the homeland.

I can’t legally work in Palestine and I can’t put my life on hold and wait for the liberation of Palestine and achieve minimal change when I know that I can do more. I aspire to be the feisty woman version of Edward Said and I need your help in achieving that. The occupation wants us to despair and wither away, but the occupation must never win.

Through the gender studies Masters program, I will be able to put my passion for equality and humanity into an academic framework. I hope to be able to inspire other young women either by sponsoring them financially or helping them secure scholarships to come and study in Europe and contribute to the advancement of women in the Arab world. I’m a firm believer that women are the true driving force of change in the world and I want to invest in those women and I hope that you will help me with this investment.

Any contribution will be appreciated no matter how small. Shukran, Thank you.

Disclaimer: Gofundme suspended my campaign until I answer the following questions:

Who you are and where you’re from?

I am Nihaya Qawasmi as stated above in my campaign statement and I’m from Palestine.

Your relationship or contact to the parties you’re raising funds for?

I’m raising the funds for myself.

How the funds will be spent (be specific as possible)?

As stated in my statement above, the money is needed for my living expenses as I work on my degree.

Your withdrawal plan to get the funds from the campaign to the ultimate beneficiary/ies?

As soon as I make it to Utrecht, I will open a bank account and deposit the money in it.